Lately it seems as though I've had several small thoughts to share, but nothing I could use to write a solid stand alone blog post. So today I am going to write about a few unrelated things, and share them all in one blog post. I suppose not everything will be baseball related, but I will try to include some images, because blog posts without pics are just not as fun. And, if it goes well, I will do this more often. I think it's kind of important that I write something as often as possible.

🌀 I was reading an article at ESPN, Cubs come right after Bryce Harper -- and get away with it. It was about the Cubs vs. Nationals game played at Wrigley Stadium last night, and how the Cubs did not deliberately walk Harper this time. I was delighted when I came to this line by Eddie Matz. - "It was a stark departure from last season, when the Cubs avoided Harper like LaVar Ball avoids silence." Can I get an amen?! Love it! 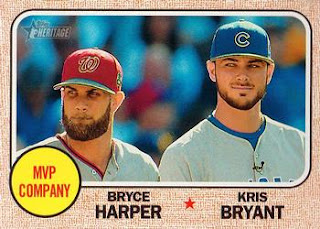 🌀 Onto another subject. I did make it out to watch the 2017 Chicago Pride Parade last Sunday. Well, I watched about the first half of it. I took my Kindle Fire with me to take pictures, but it was too bright outside for me to see anything. So there are no personal pics of the parade from me. This morning I took a few photos of my parade loot to share with all of you. 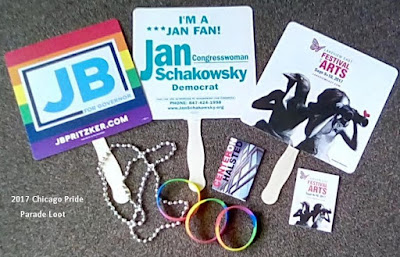 There were several politicians walking the parade route. For the most part they were distributing stickers and cardboard fans. We live on the very last block that the parade passes through, so we are lucky if any loot survives long enough to reach us. I caught the only strand of beads that was tossed my way. I'm not keeping it though, I just really wanted to make the catch! I'll be using the cardboard from the 2 political fans for packing some card trades. 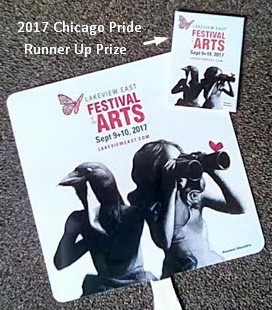 The Lakeview East Arts Festival had the 2nd best loot. Their fans are artsy (of course), and are made with plastic. I'm actually saving this fan in case (heaven forbid) we have a power outage this summer. Their coolest item though, was the magnet. It's just a tad bigger than a baseball card. A good size for a memento. 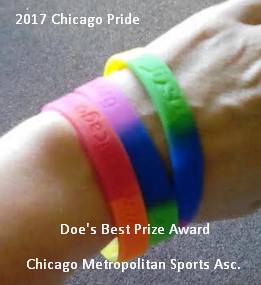 My favorite loot are the rainbow bracelets. I caught the first bracelet just seconds after catching the strand of beads. The other two bracelets were attained in a much more civilized manner. I'll be keeping these, and wearing them with pride. 👭


I have been gathering images from online sources that depict some of my favorite marchers or show our apartment building. I found a few images that I have been able to credit with a photographer, but not enough photos to create a post yet. I will work towards finding enough pictures for a parade post.

I've never been a parade watching person. The only times I have been interested in a parade has been to watch a gigantic balloon cause havoc. But, I think getting older lends a certain charm to parades. I think I will go out again next year. -Besides, the preacher on the microphone always sets up camp in front of our building. When we are in our apartment, he is painfully loud. When we are outside though, he is barely audible. If you've seen photos of Chicago Pride Parade protesters, you've seen this lake of fire breathing dragon dude.


🌀 For your daily grin, check out this video of Page Parker pitching a softball to a surprised  Drew Butera of the Kansas City Royals.
Posted by Doe M.G. at 1:32 PM