The Earth in My Pocket: an Introduction to Geology

The Earth in My Pocket: an Introduction to Geology
The Open University at FutureLearn
MOOC Course
Dr. Anne Jay
Dr. Marcus Badger

Rock  -An aggregate or combination of minerals. These smaller parts are 'grains'.

The three types of rock:

Igneous- Rocks that are formed from a molten state.  Grains of crystals that interlock and grow together. (ex. Gabbro) 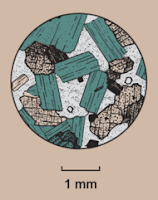 Sedimentary- Rocks that are formed from clasts (bits of material) that have cemented together.  (ex. Conglomerate) 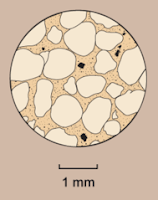 Metamorphic- rocks that are formed from heat and pressure, but not molten. May be formed from igneous, sedimentary or metamorphic rock.  Crystals are often aligned because of the pressure during formation.  (ex. Gneiss) 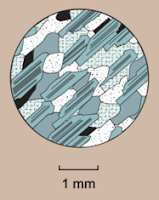 The probable route through the cycle:
Igneous rock is weathered and eroded, the bits are transported somewhere where they build up to form sediments. The sediments undergo burial and are compacted to form a sedimentary rock.
The sedimentary rock is heated during deep burial. The heat and pressure may form metamorphic rock, which may (or may not) be melted to form a magma.
The magma rises up and cools, forming a new igneous rock and the cycle starts repeats.

"Few of the rocks on the surface of the Earth are anywhere near as old as the Earth is. In fact, it’s really difficult to get an idea of how old the Earth is from dating Earth rocks, as rocks that are old enough are so incredibly hard to find (like the ~4 billion year old Acasta gneiss, pictured). To get an idea of the age of the Earth, we date specific meteorites, which are left over from the formation of the solar system."   © The Open University

At the meeting points of these plates one of three things can happen. Plates are either being created 'constructive', or destroyed 'destructive', or they just slide past each other 'conservative'.

Elements of a Smartphone at Compound Interest

Pegmatites are igneous rocks with very large crystals. Most of the crystals will be greater than 1 cm long. Igneous rock containing large minerals means that the rock cooled very slowly from their molten state to what we see today. The slow cooling is because they form deep within the crust where heat escapes ever so slowly.  There is a large pegmatite source in Western Australia. (Greenbushes) It is mined for Lithium. There also a large pegmatite source in Manitoba, Canada. (Tanco) It is mined for Tantalum and Niobium.

Bauxite is an Aluminium ore which forms from the weathering of rocks.

The Three Types of Weathering:

Physical - wind, water, falling rocks etc...
Chemical - a slow dissolve by say rain (rain is mildly acidic)
Biological - when attacked in any way by a form of life


Ranking of elements in the earth's crust:

1.) Oxygen
2.) Silicon
3.) Aluminium 8.4%, commonest metal. Feldspar forms Kaolinite, which is clay-like. When Aluminium is found with Feldspar in a tropical climate (where the clay is washed away by nature), the Aluminum is easily mined.

Energy consumption to create Alumina is 20%-40% of production costs. Whereas recycled aluminum the cost is only 5%.